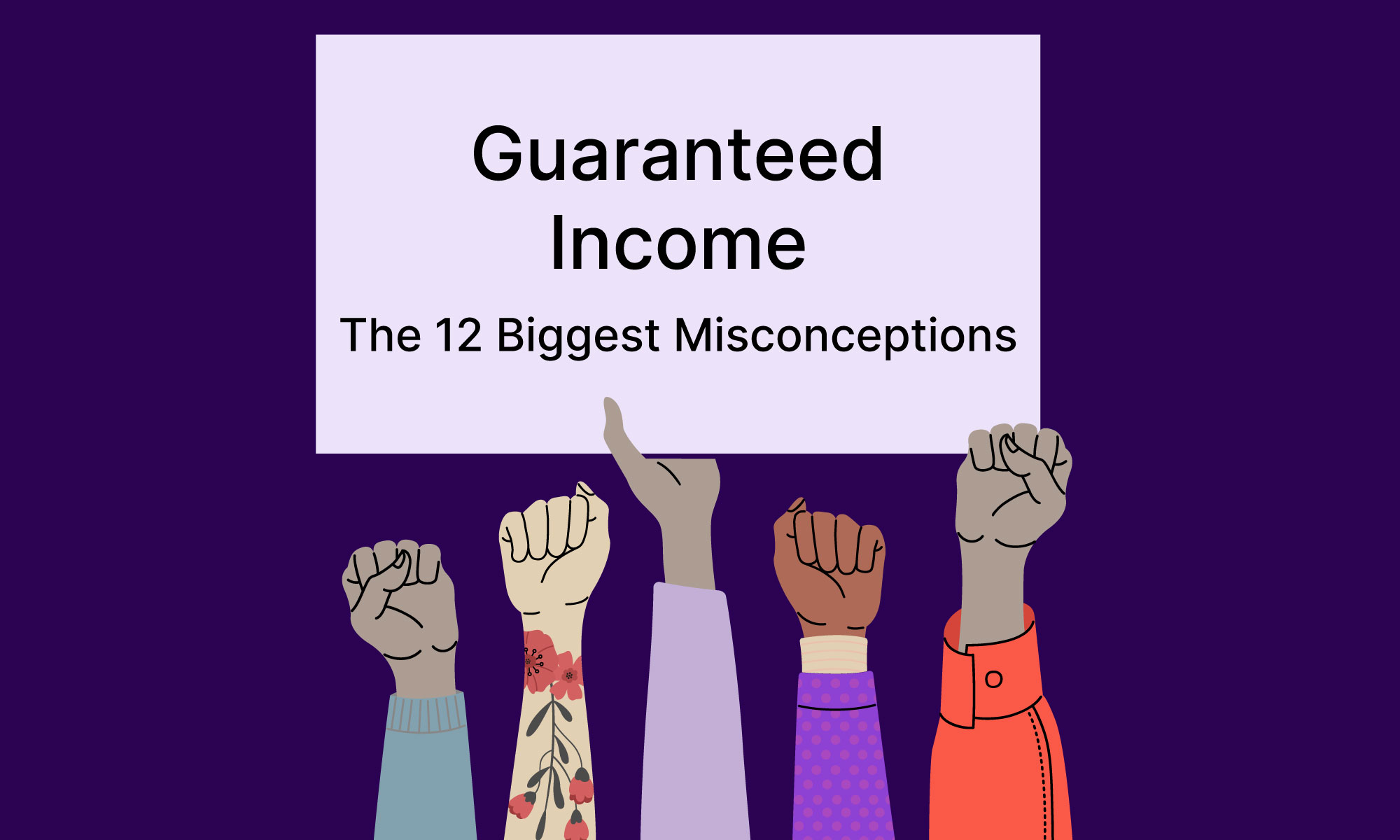 One of the best ways to move the dial is to raise awareness about guaranteed income, clearing up any remaining misconceptions. This is part of our purpose at Steady, to advocate for policies and programs that lead to lasting change and a better world for the workforce.

Let’s discuss the main misconceptions surrounding guaranteed income and similar initiatives and the real-world action plans that will bring us closer to these goals.

Guaranteed income and related concepts will get pushback from conversations with friends and family to the highest levels of policy decision-making.

Here are the top 12 most common misconceptions about guaranteed income projects and the truth everyone needs to know.

1. Guaranteed Income Has Never Been Tried

The most common misconception is also the easiest to dispute, with many examples in the past few decades alone.

Guaranteed income pilot programs have been tested everywhere, from

While we might not have seen a large-scale guaranteed income program yet, there is more than enough evidence to suggest this idea can take root in a bigger way.

“Instead of working towards guaranteed income, why not focus on something more practical like boosting the minimum wage?” This is how many respond to the idea of universal basic income (UBI).

While they’re on the right track with this line of thinking, it ignores the fact that many people are pushed out of the workforce for various reasons and cannot attain a wage of any kind. With guaranteed income, we’re looking for a way of prioritizing everyone’s well-being, especially — but not only — low-income families.

With this in mind, we should push for guaranteed income as a way to alleviate poverty for everyone and not just those able to participate in the working world. UBI is a way for us to ensure the financial security of everyone in society, guaranteeing that it is not only those with a full-time or part-time job whose basic needs are met.

Guaranteed cash payments may help to provide short-term relief to those in need, but what will it do to address the deep-seated inequality that keeps society regimented by class and hierarchy?

This is a fair dispute, but the misconception remains. The goal of UBI and programs like it is not to create a society of sameness but to fight against the effects of poverty among low earners and those who have been left behind.

A federal policy guaranteeing monthly cash payments or tax credits to all citizens will not eradicate homelessness altogether, but it will reduce economic insecurity across the board. These programs will not solve inequality in itself but rather create conditions where that’s possible.

4. There Are Already Sufficient “Safety Net” Policies in Place

While the United States has many existing programs to help alleviate poverty, guaranteed income is something more far-reaching and comprehensive than anything tried before.

The key word here is “guaranteed,” which is rarely - if ever - the case with other programs like housing assistance or food stamps. To qualify for these benefits, people must meet certain conditions and can never depend on the same amount each time.

On top of this, the United States offers citizens a paltry safety net package, especially compared with other Western nations. One example of this is healthcare, which Europeans still have trouble understanding and causes us Americans to incur debt. Additionally, the programs we do offer often scale backward on a federal level; for instance, the popular pandemic childcare tax credits have not been continued long-term.

On the other hand, guaranteed income ensures that every payment cycle, you can expect the same amount to show up in your account no matter what, giving you that peace of mind that no other program could possibly provide.

When an idea like guaranteed income is proposed, many critics already point to the high cost of social safety net programs in western countries. The implication is that UBI is far too expensive and will collapse the system under its weight.

However, a true guaranteed income plan would not simply be “tacked on” to the existing support infrastructure. It would instead be carefully crafted to make the best of the current system while leaving out unnecessary or inefficient features to save on spending.

Moreover, a guaranteed income plan would force us to look at how we spend as a society and where our priorities truly lie.

Some critics think that automation is a distant, sci-fi-movie concept that doesn’t have a bearing on the lives of real Americans in the workforce. In reality, automation is already here, and it’s one of the most pressing reasons why a guaranteed income is needed.

It’s not just manufacturing jobs that are going the way of the robot. Retail, service, and other jobs traditionally held by low-income workers are now being taken out of circulation.

Anyone paying attention to the labor market can clearly see a solution to address the automation issue, and UBI remains the most viable option.

7. Guaranteed Income Will Lead to a Socialist State

Socialism is still a dirty word for many Americans, and a concept that sounds like “free money” just rubs people the wrong way.

As always, the answers are in the data, which show that income inequality and poverty cannot be fixed with free-market action alone.

It’s also worth noting that guaranteed income doesn’t stop anyone from working or tell them how to work. This is not a centrally-planned economy, and it comes with no restrictions.

Therefore, you can set aside concerns of a socialist state where freedoms might be called into question.

The money question will appear in many forms, so be ready for all versions. Critics will point to the national debt, social security spending, medicare, and more, showing that UBI has no place in the budget.

Once again, it’s our job to explain why guaranteed income can ultimately help solve deeper problems that make us less reliant on those other safety-net services.

A healthier, more independent, and financially free population will not rely so heavily on programs that are only meant as a last line of defense.

9. Incentives Will Be Destroyed, and People Won’t Work

It’s impossible to predict the exact outcomes of a UBI program, but many suggest that such a system will eliminate the incentive to work and lead to a lazy population and a stagnant economy.

However, based on what we know, this would not be the case, as UBI payments would not be enough to allow people to leave the workforce altogether.

Instead, it would simply give people more financial stability to discover careers that suit them best, rather than fighting to survive from one paycheck to the next.

Income inequality is just one objective in a long list of overarching goals. There are also disparities between races, genders, states, cities, and more. A universal basic income program won’t be a quick fix, but it will help level the playing field for everyone to compete more fairly.

Think about single mothers who haven’t been able to plan for a career or get ahead on mortgages. With UBI, they can finally start looking for higher-paying jobs while properly looking after their kids. This is just one example of how guaranteed income can lead to massive change.

How can we be sure that guaranteed income will actually close wealth gaps, which have only grown exponentially since the pandemic? Shouldn’t there be more programs in place that grant additional resources and privileges to those who have been historically underserved?

These are all good points, but we need to start somewhere. Guaranteed income is a good entryway to bigger and better ideas that can only come about once a foundation has been set.

Before we run, we need to walk, meaning the infrastructure and logistics must first be put in place.

Over time, we can start introducing more advanced programs to help people more directly and immediately. For now, we’re fighting for the change fundamentally, which means nothing will be perfect out of the gate.

12. Recipients Will Waste the Money They Get

This is a common add-on argument levied against UBI and its counterparts: those who receive guaranteed income will only spend it on “wants” rather than “needs.”

This raises concerns that money won’t cover necessities and instead go towards overpriced shoes, alcohol, and entertainment.

But the Stockton Economic Empowerment Demonstration disproved this in a recent study which found that most recipients spent money on food and rent.

Less than one percent of the cash was spent on alcohol and tobacco, suggesting that economic security could, in fact, lead to less reliance on negative outlets.

Most arguments against universal income follow a similar format and boil down to money, labor, and incentives concerns. It’s not enough to ask if basic income will reduce work, but rather what type of work will be reduced and what better alternatives may come about.

This serves as a reminder that working for the sake of work - or for measly wages - isn’t a gratifying or life-affirming experience for anyone. In fact, it feels like treading water after many years.

The point of guaranteed income is to get people off that hamster wheel and protect them from being just one paycheck away from disaster. With that added assurance comes the ability to direct oneself towards a better life with more meaningful, higher-paying work.

So while it may be accurate to say that guaranteed income may reduce the pure work an average person does in a week, they will likely be doing more effective, efficient, and productive work overall in the same time.

Economics is a complex subject with no easy answers. There’s always more to the story than what we hear from news channels and bestselling books. Therefore, it’s no surprise that a topic like guaranteed income is misunderstood and why we’re still so far from eliminating poverty in the world’s richest nations.

But as wealth gaps and other forms of inequality grow wider, we have less time to waste discussing guaranteed income and putting together a plan. There is an urgent need to set the record straight about this concept and start turning theory into practice.

Outside-the-box ideas will always face resistance, even when we need them most. Ideas like guaranteed income have made headway in the public sphere, but many of these misconceptions are still floating around.

Be sure to advocate and work with those who also have your best interests in mind. With Steady and our partners pushing these ideas forward and driving for change in the private sector, we hope everyone gets on board. 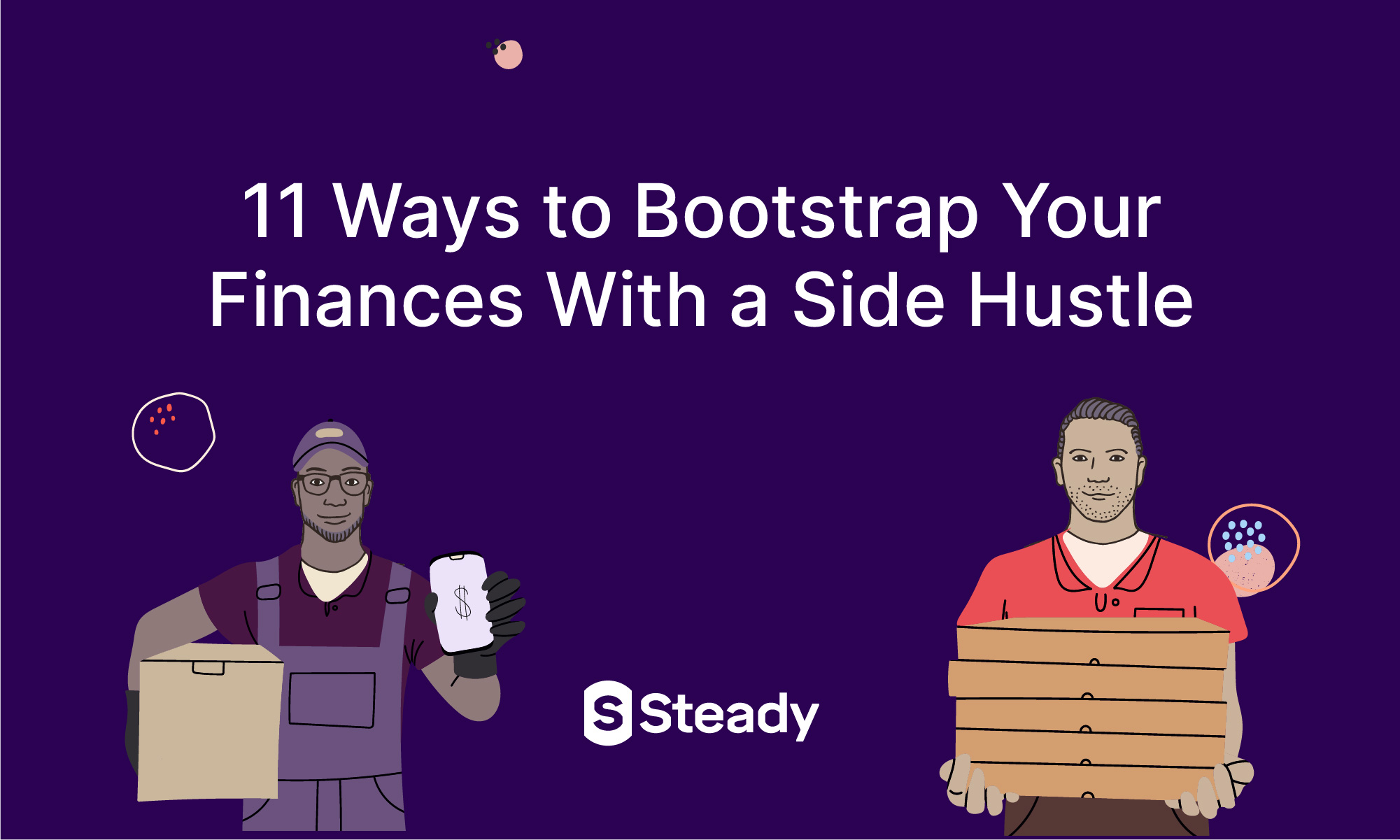 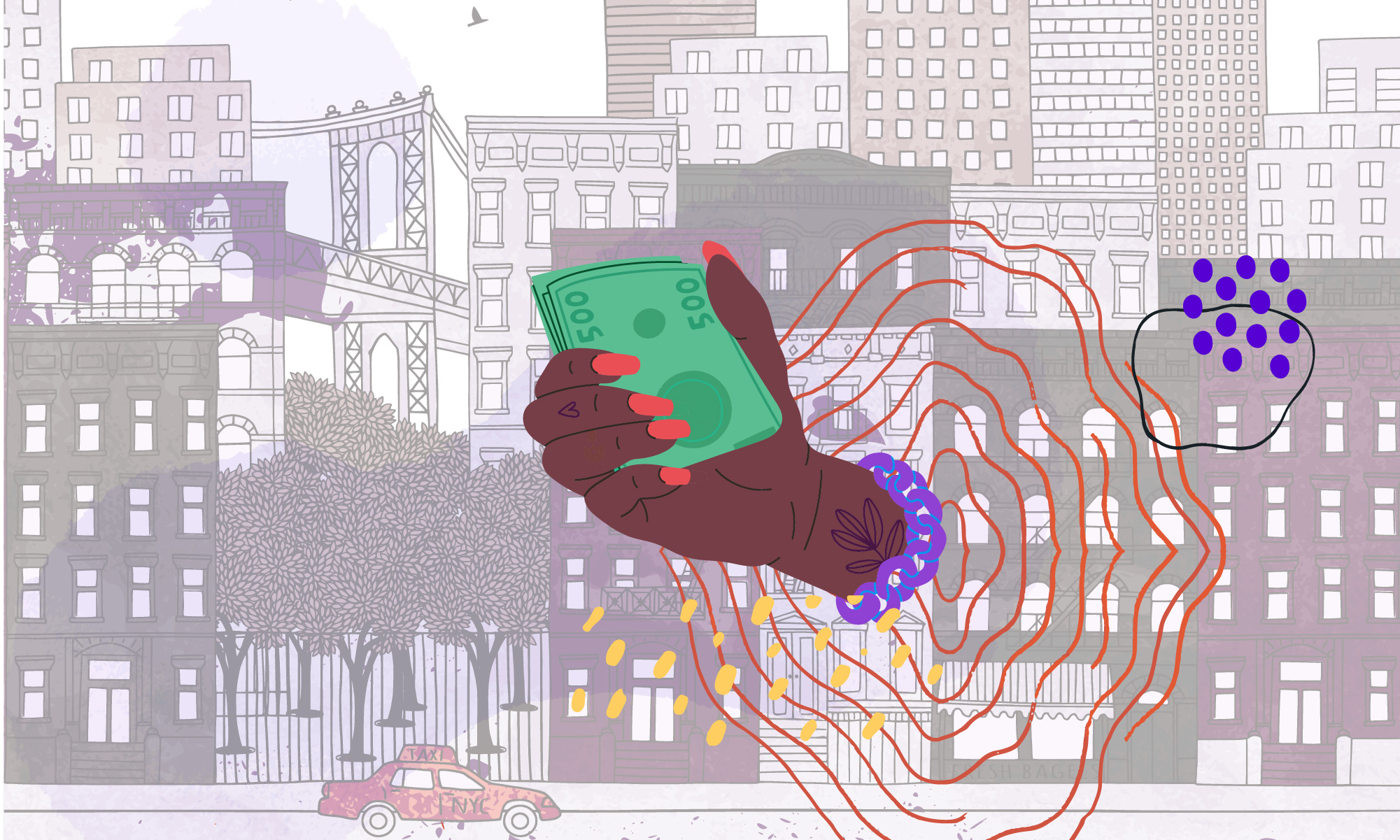 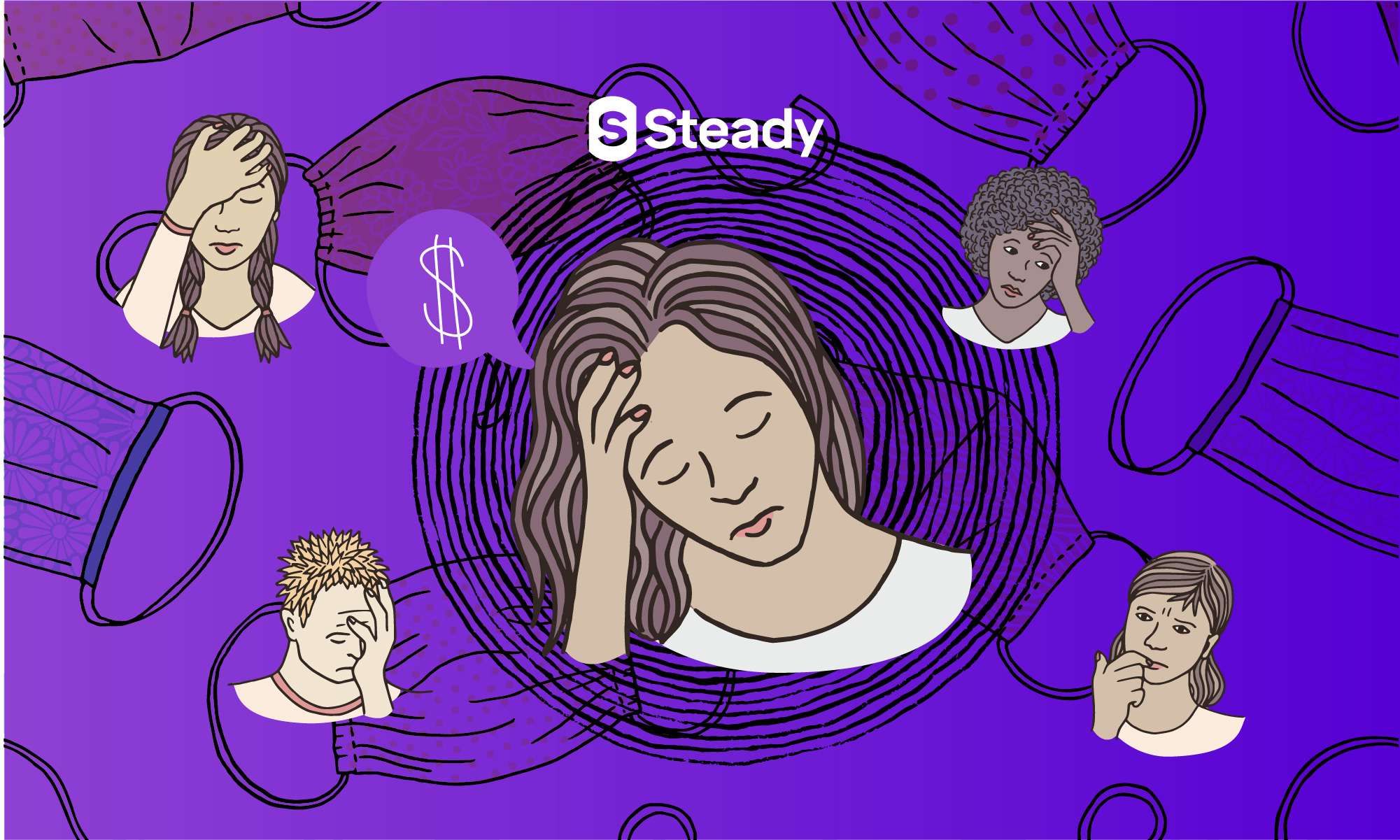